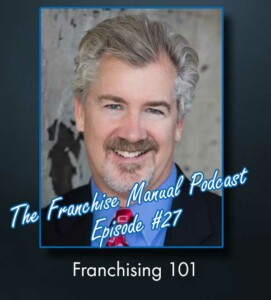 Rob Vinson talks with us about Franchising 101. Where to start when you backed into franchising by accident, and don’t know where to go.

Rob has been a franchise attorney for 26 years. He was a partner at the prestigious law firm of Strasburger and Price, which is now Clark Hill after an April 2018 merger. Over 13 years he worked his way from associate up to partner. In 2001, he started his own law practice of Vinson Franchise Law and has been doing that ever since. He works, and has worked, with clients all over the United States as well as internationally.
Rob is also a founding partner of FranMan Inc, a company that specializes in producing franchise operating manuals.

In 26 years Rob has accumulated a great deal of experience that he is going to share with us today.